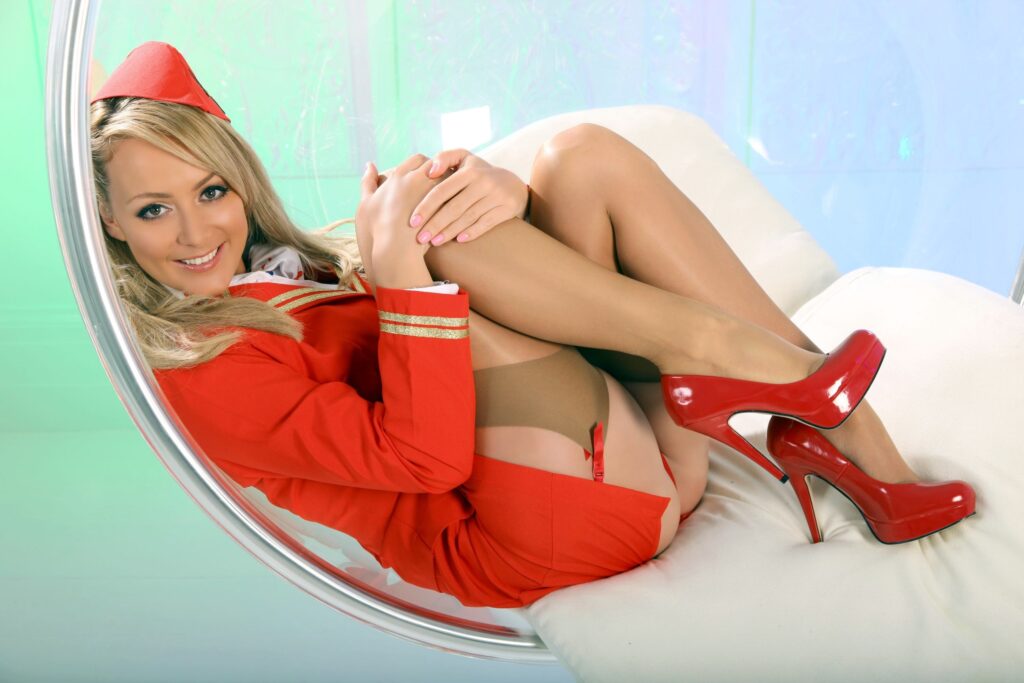 A number of years ago, before pantyhose replaced stockings, I had a neat experience on a local commuter airline. Shortly after boarding one morning, I seated myself in an aisle seat where I knew I would have a nice view of the stewardesses. On this flight, there was one particularly beautiful stewardess – a Chinese girl in her mid-20s, about 5’7″, trim, and with slender legs. Her name was Lynn. Her uniform consisted of a one-piece white, knee-length dress, coffee-coloured hosiery, and 2″ heels.

As Lynn walked down the aisle checking to see whether everyone was seated properly, I couldn’t take my eyes off her tightly-fitting dress that showed a trace of what she wore underneath. She must have had a thin slip, because her garters and stocking tops, as well as her panty lines easily showed through. The bumps of her garter tabs were quite visible against the smooth surface of her dress. Whenever she reached up to check the overhead bins, her dress rode up to reveal the dark tops of her stockings, but not quite her thighs. When she walked past my seat, I made sure my arm stuck out a little on the armrest. Sure enough, her nylon-clad leg brushed against my arm, sending an electrical charge up to my head. Mercifully, we took off shortly after. I chose my seat well. She sat up ahead in the stewards’ chairs facing the rear. I had a clear view of her as she sat during takeoff. The gorgeous view of her legs sheathed in coffee toned nylons sure beat the scenery outside. As she crossed her legs and recrossed them, I could almost hear the distinct sound of nylon above the engine’s din. There were many tantalising views of her stockings as her dress rode up enough to provide glimpses of her thighs.

In the middle of the short flight, she came down the aisle serving juice, soda, and water. As she approached me, the plane must have hit an air pocket as it dropped suddenly, sending Lynn tumbling backward onto the aisle. She couldn’t keep her balance and fell on the floor, legs splayed all over – with all the drinks spilling onto her. For a moment, she sat bewildered with her left leg stretched out, her right knee up, and her thin white dress soaked through.

I unstrapped my seat buckle, got up, and walked toward her, when we hit another air pocket. I fell forward and ended up with my head between her legs, driving up her dress hem way beyond her dark stocking tops. My left hand rested on her right leg, while my right hand was on her left thigh – right on her garter straps. I looked right into her sheer off white panties, the fair skin of her upper thighs exposed above her long, sheer stockings which extended way up.

When I saw the distinct light edge of her dark stockings, I knew I had a rare treat. She was wearing those old Hanes stockings, the sheer non-stretch kind that’s hard to find today. I also recognised the colour – gentlebrown – a dark brown, like coffee, but not quite as dark as barely black. Gentlebrown just happened to be my favourite colour, next to South Pacific, a suntan colour, barely there, a very light tan, and town taupe.

This was heaven! Her thighs were firm and the feel of the Hanes against her legs was just terrific. The nylon surface was silky smooth and glistening with moisture.

Of course, I took my time getting to my feet, then helping her up. The feel of her nyloned legs, soaked through all the way up, was just incredible. She looked quite embarrassed, to say the least, as she sheepishly thanked me while pulling herself together.

Trying to bring her dress hem down didn’t help her modesty as the wet fabric clung to her legs and revealed her fine undergarments like an x-ray. Lynn retired to the forward restroom where she dried herself as well as she could. I didn’t see her again until just before landing, when she came out and seated herself again. After touching down and docking, I made sure I was one of the last ones deplaning so I could have a word with her.

I approached the exit door and smiled at her. Lynn smiled back as she said, “Thanks for helping me out back there. I’ve never had an experience like that.” I replied, “Same here.” What an understatement! Now was my chance. I calmly said, “Have you done any modelling? I’m a freelance photographer and would like to do some portraits of you.” Lynn replied, “Well, not really, but I’ve been thinking of going to modelling school and could use a portfolio.” I said, “Well, it just happens that I do portfolios.” We exchanged phone numbers and promised to get in touch with each other.

We saw each other again a couple of weeks later. I went to pick her up in my VW bug. When she came to the door, she was wearing a yellow dress and medium leather finish heels. Having come prepared, I had a pair of Hanes off-black stockings with me. Casually, I asked her if she wouldn’t mind putting on the stockings to complement her dress (black and yellow look nice in colour). Fortunately, the 9 medium fitted her nicely, perhaps a bit on the long side. But that was fine, as I later found that the stockings extended almost to her crotch and matched her black garters perfectly. Being a beauty contestant at the college, she was absolutely breathtaking in her yellow dress and black nylons. Satisfied with her outfit, she got into my bug. We drove off to a nearby park with a running stream and waterfall.

When we got to the park, there was hardly anyone there to bother us. We had the whole park to ourselves. From the parking lot, we walked down toward the stream. There was a boulder and nearby large tree which I started with for background. I had a flash along for fill light, in case it got too dark in the shade. This was fortunate, for it was a bit dark to otherwise get details in the shadows. As she sat on a boulder, I worked around her, posing her in various positions, getting her relaxed. Gradually, her yellow dress hiked up bit by bit, exposing her dark stocking tops. Eventually, her garter clasps showed below her hemline. I was getting more and more excited at the possibilities. We moved on to the tree which had large surface roots extending out in several directions. Standing on the root, she went through various poses – some with her arms extended up and behind her head. I noticed the higher she held her arms, the higher her dress hem hiked up. I had her look off to the side so she would be less aware of where I was shooting from. I got a bunch of shots from a low angle, revealing the full length of her black-nylon covered legs, black stocking tops, garters, straps, and black panties. I moved in closer and closer with my 35mm wide angle, until I was a couple of feet from her legs. One of her garter clasps had unhooked, so I was able to get shots of her stocking tops, the garter clasp hanging, and her black-panty covered crotch. I was almost beside myself, feeling light-headed. A little later, I had her sit down on a low boulder. I asked her to relax by taking off her platform shoes. She obliged.

Now I had a clear shot up her legs with her stocking-covered feet in the foreground; the reinforced heels and toes came out clearly. I had her stand so I could get full-length shots of her with the black nylons. Throughout the entire session, she didn’t seem to mind the posing at all. I wonder if she was aware at all about the kinds of shots I was taking? Eventually, I ran out of film – both slides and black-and-white. Regretfully, I drove her home. We had another shoot a couple of months later after she was really satisfied with the nice portraits I had taken (she never did see the contact sheet or full set of slides), we arranged another shoot at her home.

Unfortunately, she wasn’t wearing stockings this time, just pantyhose. I still managed to get a few up-the-skirt shots of her dark hose showing her tri-coloured panties underneath, but somehow it wasn’t as satisfying, if you know what I mean.