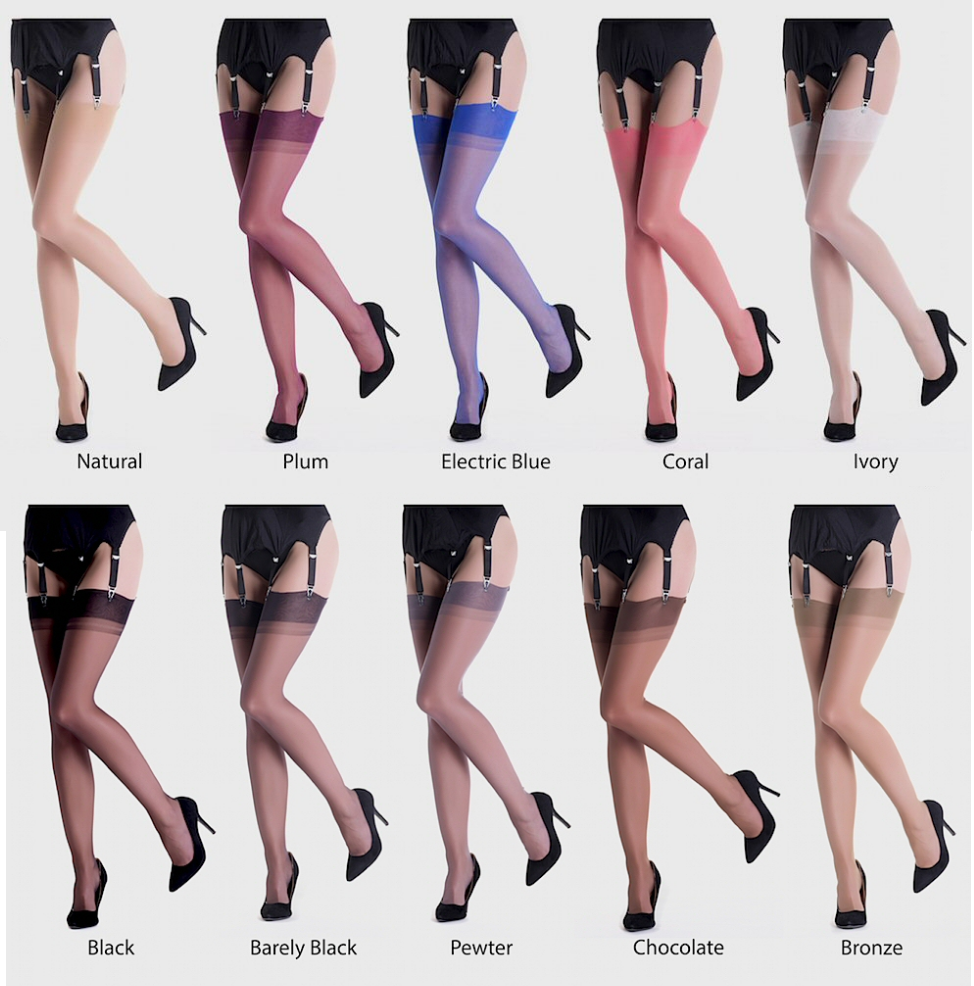 – I just wish there were some other ladies who liked to wear stockings in Mesa, Arizona or surrounding communities, I feel very alone in my liking for stockings. No one says anything to me about the stockings when they see me wearing them. People show very little interest, it’s discouraging. I think that one of the problems is that there is not enough encouragement for women to wear stockings. I’ve kind of covertly watched people’s reactions and they just don’t react at all or they’ll look at me kind of oddly for a split second.

Why do you suppose this is?

– Simple answer really: you look so confident, proud, elegant and classy wearing stockings that the men and women that look at you can’t quite work out why. Also because bare legs seem to be increasingly accepted with a lack of femininity and skirt wearing declining in general, you tend to stand out for your high standards.

Basically you are showing other women up, and that is why so many people look at you oddly for a split second, wondering why you show out so much being dressed so nicely in skirts and stockings amongst all the jeans, pants, skimpy crop tops and cuttoffs etc.

The encouragement thing is because so many men are encouraged to think of stocking wearing women as sluts and streetwalkers, but in fact many are sophisticated and intelligent women who often hold very responsible postions in the workforce and society. Many of the other women who frequent this wonderful forum, don’t just wear stockings for a cheap sex thrill.

– I guess it’s natural to wonder a little bit what other people are thinking when they see you wearing stockings but try not to let it affect you too much. If they give you pleasure and confidence that’s all that matters. You may be unwittingly encouraging other women to wear them by making your postings on this board and that isn’t all bad. Enjoy your stockings always.

– Thank you so much for your thoughtful and wonderful compliments and thoughtful answers to my questions. It gives me hope to hear your answers, I do feel very feminine indeed in my FF stockings, and even just enjoy wearing them because they are so very soft and silky I never tire of the feeling of them on my legs.

– I simply applaud you for your self-confidence and courage. I am, however, surprised that no one ever makes a remark, though it’s certainly nice that you haven’t been insulted. (It makes me wonder what goes through people’s minds.) Have you ever thought about subtly engaging an acquaintance about your stocking-wearing? Nevertheless I admire your single-mindedness and ‘to heck with public opinion’ attitude to dress as you desire. More power to you!

– While I’ve not been accosted by anyone for wearing stockings, I have encountered disapproving stares. (I’m mostly in FFs as I tend to favour them over RHTs.) These are mostly from women of – shall I dare say – the “hairy leg brigade”.

When I first began wearing stockings, I was a little self-conscious and not sure of what I might encounter. However over time, I have gained confidence. I don’t have time to be concerned about some stranger’s opinion of me. And for that matter, those people from whom I’ve received disapproving glances haven’t a leg to stand on themselves!

A few men who have stopped me to ask whether I’m actually wearing stockings, and I always reply yes. They have only ever been complimentary, never rude or suggestive. They do ask what made me start wearing them, and whether it was the influence of a boyfriend, husband, etc. My one regret: I should have tried wearing stockings years ago – I would have had many more dates!

I was recently at a car dealership in Scottsdale, Arizona and I was wearing my nude colored FF point heel stockings with a very pretty blue green dress and ivory 2 1/4 inch heels and I noticed one of the salesman looked at my legs and frowned but said nothing. I’m assuming his response was partly due to his thinking “why was I wearing stockings or hosiery in over 107 degree heat”.