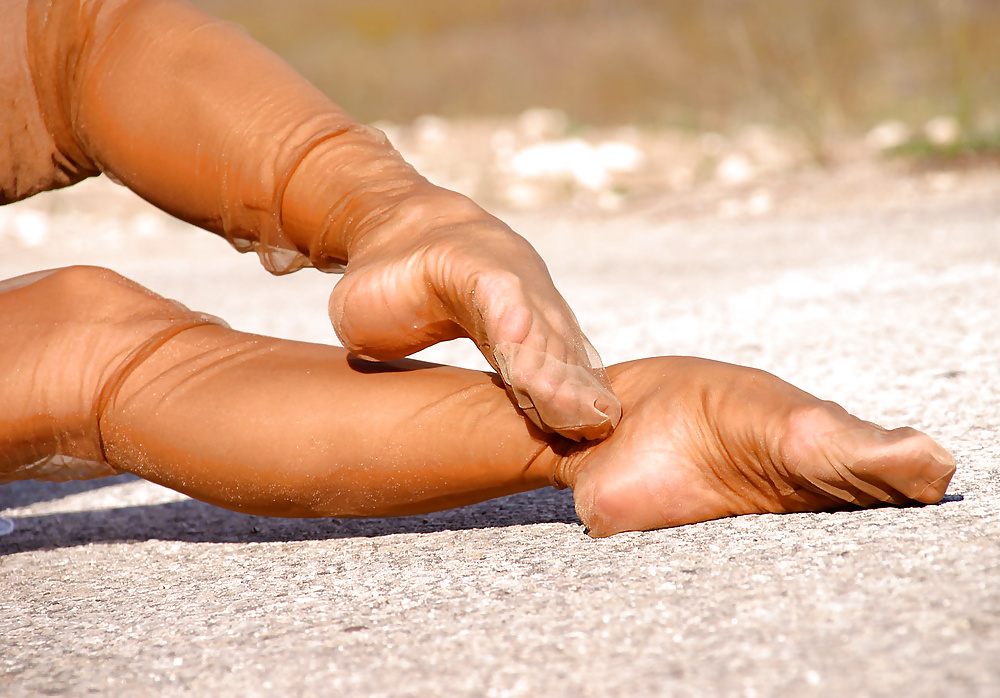 Now, it was somewhere through this time of my life that I started getting introduced to erotic magazines. One of my friends had an older brother living at home who would buy various publications. Fortunately, my friend would sneak out the older issues, and we would hungrily devour them! The pictures therein simply reinforced my mental association I was making between nylons and sexuality. For almost without fail, the women therein were wearing stockings. This was before the lax, unimaginative obscenity laws of today, as there were many restrictions as to just what, and just how, a woman’s attributes could be displayed. Thus, the photographer and model had to be more creative to portray that certain acts were taking place, and had to seek to employ a long lost faculty among today’s eroticism: The imagination.

Usually, they tried to accomplish this with a pictorial “series” article. That is, a particular “scene” would contain several pictures as the action progressed. One of the ways the photographer and model would convey a wild solo experience would involve the nylons she would be wearing. As the scene would progress to the point that she was as unclad and exposed as she could legally be, the stockings would leave the impression that she was frolicking with great abandon. Typically, by the last pictures, her nylons would be quite twisted and sagging, often the relaxed portions gathering significantly above her ankles. To reinforce the impression that she had been cavorting on that bed with sensual abandon, one or two of her garters would be unfastened, which would add even more to the disarray of her stockings. It is unfathomable how many times I experienced auto eroticism while staring at the most arousing of the pictures. Well, the most arousing picture for that encounter! (For it would change from encounter to encounter.)

And, it’s an imprint that is just as powerful to me now as then, maybe even more so. As the wrinkled nylon eroticism was being quietly imprinted into my mind, another item was not-so-quietly imprinted also. And that is…

As guys get thoroughly in the grips of puberty’s hormones, it becomes quite natural for those guys to talk about girls. In my circle of fellows, we would do this often. One time we were talking about our favourite turn-ons. We all agreed that a nice looking behind definitely got the juices flowing, some really liked breasts, etc. Well, since we were all talking about our turn-ons, and feeling I was among sexually-minded friends making their inner most feelings bare, I told them that I also found a girl in stockings very arousing.

For some odd reason, I was ridiculed for my tastes! The next day as we waited at the school bus stop, a rather plain looking young lady who lived in the neighbourhood was walking toward the stop area. One of my “friends” looked at me and blurted out…

“Whoa dude.. there she is! Better go get her! She’s wearing stockings!”

Like lemmings blindly follow the lemming in front of them, my other “friends” that were privy to the matter laughed in appreciation of the remark, and joined in the ridicule. So much for close friends.

Lesson: Don’t ever tell another soul. EVER.

But it had left its mark. The message I received loud and clear was: “They” were “normal”, because pure female nudity was the ultimate in arousal for them. “I” was a “weirdo” because I found nyloned legs ADDED TO the arousing attributes of a woman. From that point on, my fascination with nylons began to be a part of me that I was uncomfortable with, and such a nylon fascination was never, ever, verbalized again to any contemporary male friend(s) or any of the young ladies I was to date.