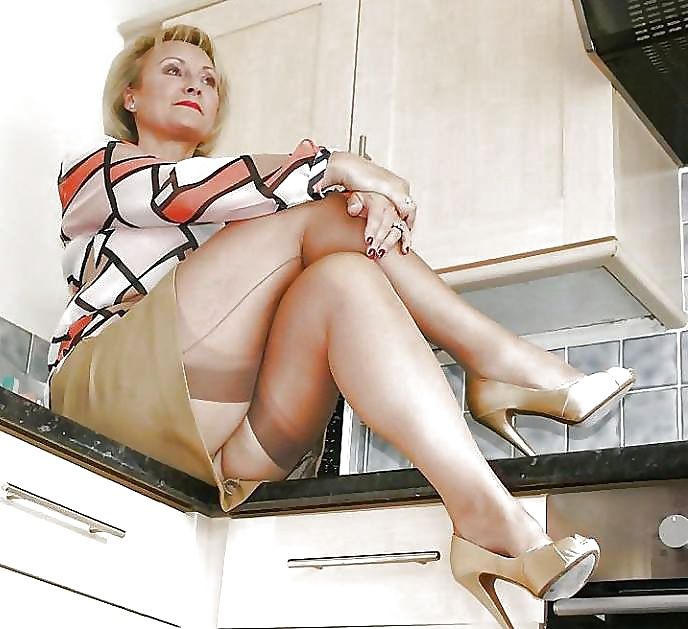 “I must admit that as a gentleman, I don’t subscribe to mini-skirts with stockings, although I do know one lady in the south of England who does a masterful job in not letting anyone know she is wearing stockings when she wears a short skirt. We went to dinner and then out to a club one night and I did not have a clue until she took my hand and put it on her suspender button in the taxi on the way home and I could feel it through the material in her skirt.

“That’s where long or tall stockings come in, and on that note, I must admit I am more partial to a high stocking than a low one myself. In shopping for my lady friends I have noticed that in the late ’60s some manufacturers actually sold stockings which were made to be worn with mini-skirts though, and stockings to me are always more alluring than pantyhose or tights.

“I am not one for obvious display – your glimpse instead of an eyeful is spot-on as they say over here (imagination is a great thing for a man). But I was out with a stocking-wearing lady friend of mine not too long ago and she showed stocking top in a bar. When I modestly pulled her hem down so it was less revealing, she objected, as she said that was part of the fun of wearing stockings – so I guess it takes all types. That didn’t bother me, as long as I knew that was what she thought, but I’d really think twice about taking out a lady who showed herself off to all and sundry.

“In sum, I love intelligent women who dress modestly and have the skill to wear stockings without the whole world knowing it. They know what it’s about and I appreciate that – as long as I know why should everybody else?”

“I had to go to a semi-formal Christmas business dinner and decided to wear a suede below the knee skirt with 3” slits on each side, which were way down near the knees. I went with light tan, extra long fully fashioned stockings which I wore for the first time. I doubled over the welts as usual with these long stockings, and never thought any more about them.

“The restaurant was rather dim, and tables were close to each other – the more the merrier – more customers in less space. A girl whom I knew only casually sitting two chairs away, came over and quietly whispered in my ear that my stockings were showing. Very, very quickly I reached down and noticed that the slits that started near the knees, gradually worked their way up, and the bottom of the welts and the side suspender buttons were well and truly peaking out. I spent the next half hour adjusting and puling the skirt down and eventually solved the problem, by folding the welts back again, over the suspenders, thus ‘hiding them’. I will have to be more careful with this slit. Later in the Ladies the girl who originally warned me, asked about why I was wearing stockings, and appeared to be quite interested.”

“I personally think folded-over stocking tops can look quite sexy, but they are hardly ever illustrated that way. I have known women to wear them that way – maybe they’re more secure. They certainly they look better than stockings that are too short!

“You will see on lots of stocking packets that they all seemed to be attached right at the top. I used to think that this was the right way, but the clips used to come undone, the stocking would move down and the strap was loose. Very problematic.

“I only ‘discovered’ what other ladies also have before me, so now whether it is attractive or not, the stockings are held tight, they do not ride down, and can be worn all day with no problems. With shorter skirts (above the knee) I try and make sure that the welts do not show.”

Origins of a stocking fetish – the school effect
previous post

Origins of a stocking fetish – the school effect