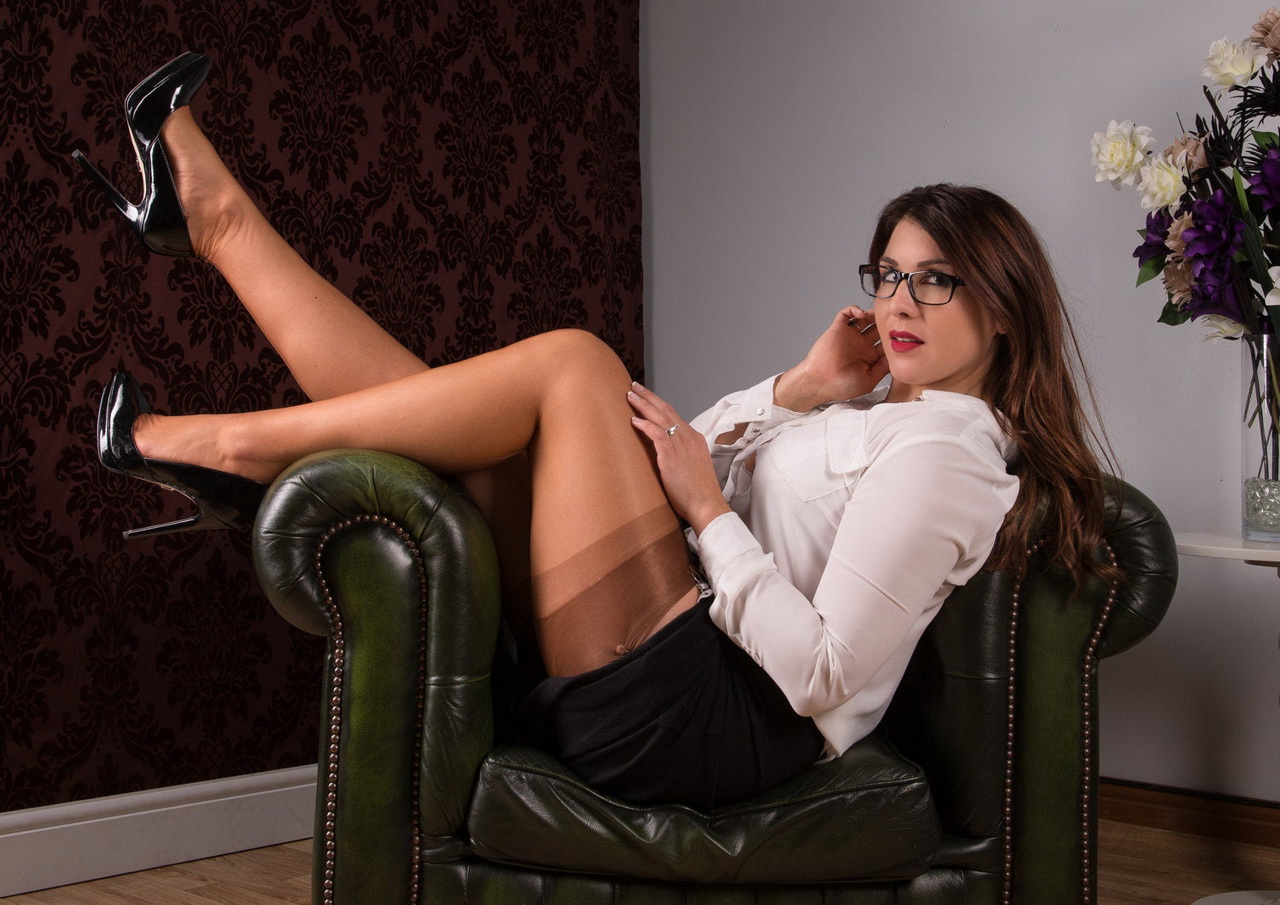 “One correspondent recently suggested that the relentless slide toward lowest-common-denominator dress has some merit, i.e. that it made the increasing rarity of stockings all the more desirable. I have to tell you now that I find this argument pure, unalloyed nonsense.

“Firstly, I am sure that I speak for all those readers who enjoyed the second, all too brief, flowering of stockings in the latter 1980s and very much regretted the sudden and, I think, final, collapse of stocking wearing circa 1991-1992. Life is simply much poorer and more dreary without femininity in ladies’ dress. Of more relevance, however, is some actual ‘field’ research I have carried out in the past two weeks. Desperate to establish why the trend has been toward ever more casual (indeed, ultra-casual) dress, I began to quiz young women of the ages 18-25(ish) on their tastes and preferences. Without exception, all expressed their distaste for tights. A few grudgingly complied, wearing 70 denier opaque tights, but only when they absolutely had to, i.e. in those workplaces where such a dress code existed. I then openly asked the question: what of stockings and suspenders? Again, without exception, every single one expressed their complete scorn for the very idea. One suggested that she might wear white stockings on her wedding day, and another thought that perhaps she might wear them ‘in the bedroom’ (her words) to give her fiance a special treat.

“The last of these ‘interviews’ took place in a pub on Wednesday evening; every female present wore either trousers, jeans, leggings or tracksuit bottoms. My research was carried out in the north of England, but I suspect its results hold true for the rest of the country. Given that these women are the future, it seems highly likely that hosiery in general is in terminal decline and stockings, obviously, will be the first to go. The attitudes of the women I questioned were unequivocal: we don’t want to know. Peer-group pressure, an immensely strong force, will guarantee conformity. So, those here who enjoy the ‘exclusivity’ of those ‘rare and exciting’ glimpses, savour your next sighting, it may be your last.”

“For several years now I have been keeping a count of how many times I have seen a woman wearing stockings. Just for the record these are the results

“I’m not sure that this really proves anything, except that here are still plenty of women wearing stockings if you know where to look.”

“I don’t know if there are geographic, economic and social class factors at work here, but as a Londoner, I can confirm that professional women (including businesswomen, lawyers, secretaries etc) in London wear dresses/skirts almost all of the time, and whilst I agree that it is not universal, I see no sign of extinction of hosiery (opaques in winter, sheer in summer) for a long time yet!

“Even on a recent week-end trip to Nottingham, I was pleasantly surprised by the number of women, of all ages, wearing dresses/skirts, and hosiery of one sort or another – and these were clearly not being worn as part of an office dress-code etc. I was also pleased with the quality of the legs seen!

“I also live near a prep school, and a number of the mothers I see every day collecting their children are wearing dresses and hosiery. These are, by and large ‘stay at home’ mothers and housewives.

“So, I’m happy to spread a note of optimism amongst all the gloom and doom!”

“You are both right and wrong in my opinion. Strangely enough I have also had the odd conversation with some women in the appropriate setting when answers are more likely to be given more freely and truthfully. Down here in London I fairly frequently catch a glimpse/definite telltale sign that a fair number of women under 30 (even 25) are wearing stockings these days. But I don’t think the ridiculous cost of living down here is worth putting up with just for that, however nice it may be!”

“Having read today’s ‘Times’ Part 2 supplement, there’s an article confirming the ‘bare legged in all weathers’ look as a Northern thing, and a ghastly photograph of a couple of slappers sitting outside a Newcastle nightclub wearing criminally short skirts, and warming their ugly bared toes! To add insult to injury, the article goes on to say something about the only non bare-legs seen in the wintry North being women wearing opaques, who are regarded as wimps by all the others!”

“I think you need to broaden your horizons. In the shop I see women in stockings every day – aged from 18 right up to their 60s. Around town fishnets are everywhere you look. Okay, so they are probably tights but it shows that girls are thinking about what they’re wearing on their legs and that’s a good sign.

“I have to admit that when I go to the launderette I don’t wear stockings but if I’m going anywhere remotely interesting then I dress up a little.”

“Fact: in my experience young women around my age seem to be increasingly turning to holdups which, while still maybe not enough for the purists, is a Very Good Thing.”

“I’ve read articles about nylon stockings and without doubt the fact they have been a phenomenon (easy for me to say!) over 60 years is proof of the pudding. But it’s fair to say sales will never reach the heights they once did. It could be a fashion cycle issue or it might be a society issue but one thing’s for certain, if any product is not advertised to the widest audiences it won’t sell too well. During the eighties nylons were advertised on British TV, newspapers, bus shelters and those giant bill boards (crikey the number of times I nearly hit a lamppost when driving past the boards!).